We fixed Google Maps to have the right location for Lyran Park a few years ago. Some people still have old GPS systems with non updated maps.  Here is where the park is:

This upper map shows the general area. The Park is at the blue marker in the lower left.

Below we Zoom into where some confusion arises.

The Park is on South (S) Bend Road.  To the east, S Bend comes from Baxter Road. Baxter crosses IL 251 and then turns into Beltline Road going straight while Baxter turns right and then shortly turns into S Bend Road.

Here is where the park is, to the west side of S Bend near Kishwaukee Rd. 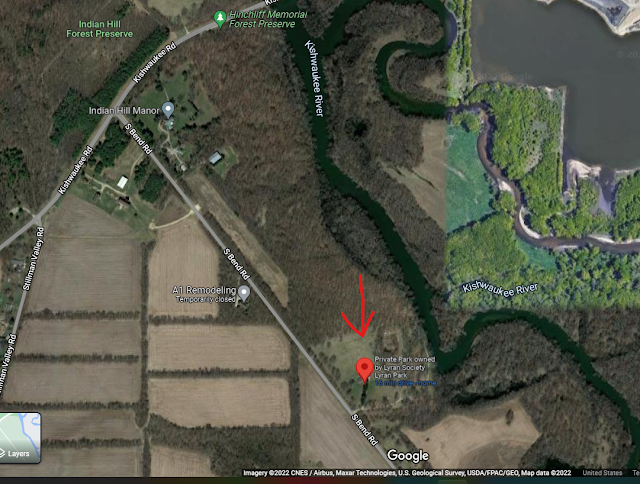 The Tough Mudder occurs the same weekend as our festival and it is on Beltline Road. They close Beltline for that, but the Rockford Police know to let travelers go onto Baxter and then S Bend. We speak to them every year tro remind them, but they occasionally have an officer who messes up,

Posted by Crossroads Blues Society at 7:53 PM No comments:

Buy online. Tickets otdered within one week of the festival date will be held and available at the Will Call at the Gate Tent.

Here are our outlets:

Thank you to our sponsors! 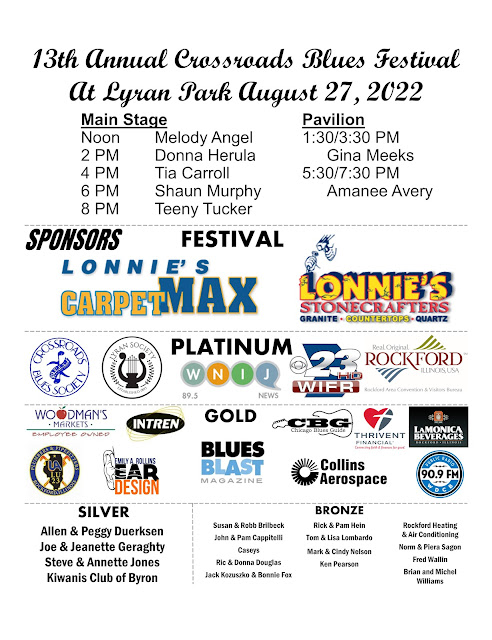 Posted by Crossroads Blues Society at 9:30 AM No comments: 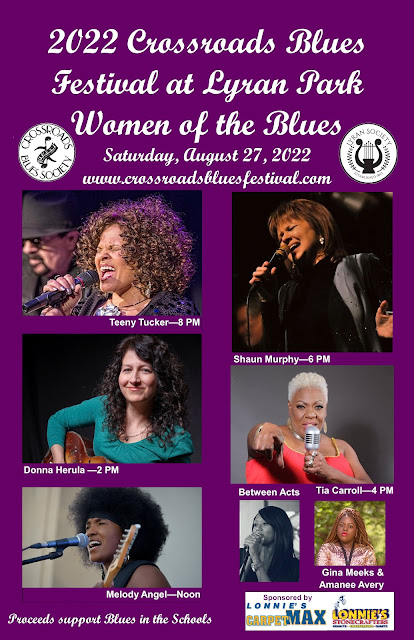 After two years of small, "non-festival" events, the full fledged festival hopefully returns for the Thirteenth Annual Crossroads Blues Festival returns at Lyran Park on Saturday, August 27, 2002 for a great day of music. This year’s even is Women of the Blues, featuring five great acts on the main stage and two acts between the main stage acts doing a pair of short sets each.

The day will begin with two great Chicago acts, Melody Angel at noon and Donna Herula at 2 PM. Melody is a high powered guitar player, songwriter and singer who is making a name for herself in the blues world. This is her first time playing in Rockford and we are proud to bring her to you! After that we have renowned artist and music educator Donna Herula and her band. Donna's 2021 album garnered notice for last year's blues awards and got lots of airplay.  In addition to touring and performing, Herula is a fantastic teacher at Chicago's Old Town School of Music. It’s going to be a great time!

At 4 PM we are bringing a fantastic West Coast soul blues woman to town, her first Midwest tour. She spends a lot of time on either coast and playing around the globe but she’s never been here and we wanted to fix that. Tia Carroll hails from San Francisco and is a power house vocalist. We’ve reviewed her CDs since 2008 and her last album that we reviewed was nominated for a Blues Blast Music Award! She is an amazing singer and we know fans will love her and her music.

We have the great Shaun Murphy at 6 PM coming up from Nashville. Shaun is an amazing singer. She was here at the Tebala events Center in Fall of 2019 at the Blues Blast Awards and has been in Chicago many times and has also appeared at the Mississippi Valley Blues Festival. Shaun has been the backing vocalist for Bob Seger for pretty much his whole career. She has also worked with Eric Clapton and Little Feat on top of her long and storied 40 year solo career. Shaun might be a rocker when she needs to be, but since attending the Ann Arbor Blues Festival in 1969 her first love has been the blues. She got her start in the Motor City and even released a duo album with Meatloaf (Stoney and Meatloaf). Shaun is an amazing artist and we are so happy she agreed to come and sing and play for us!

Concluding the day is none other that Teeny Tucker from Ohio. Teeny was supposed to be here in 2019 when the Pandemic put the kibosh on our fest. Last summer she planned to grace the stage for us but right before that date her guitar player and manager came down with medical issues that precluded her touring to play for us, so we moved her and her band to 2022 because we love her and her music and want to see and hear her. The daughter of Tommy “Hi-Heeled Sneakers” Tucker, Teeny was brought up in the blues and R&B and is a powerful singer and great talent in her own right.  She last played her in Rockford at the Tebala Events Center, at the 2018 Blues Blast Music Awards show. We have five fantastic acts on the main stage for you, and there is even more!

Between acts we have Gina Meeks and Amanee Avery performing in the Pavilion. Gina is a great singer who sings with the great Rockford band Groove Hotel and also appears with other artists and on her own. She will perform at 1:30 PM and 3:30 PM. Amanee is dubbed Rockford's Sax Chick  and is an up and coming local talent who sings, plays and writes songs. She will perform at 5:30 PM and 7:30 PM.

Food vendors will provide great things to eat, and a great selection of beer and wine will be served for $5 along with soft drinks for $1. No coolers or outside food and or pets, please. Tickets will go on sale March 1st at $10 in advance and day of the event is $15 at the gate.  It’s going to be another spectacular event– buy your tickets early and come out for an amazing day of music that will be brought to you by Lonnie’s CarpetMax and Stonecrafters! 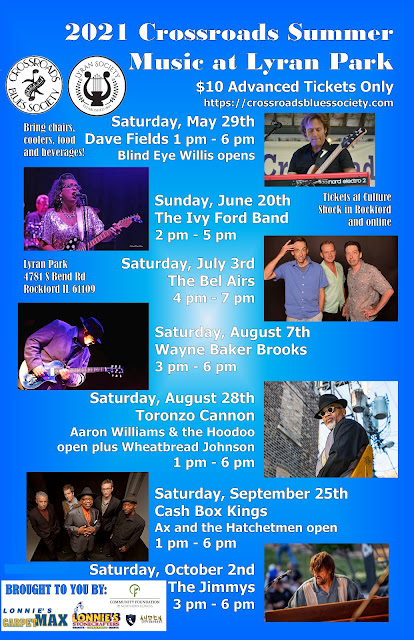 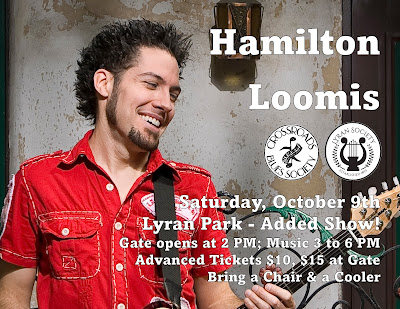 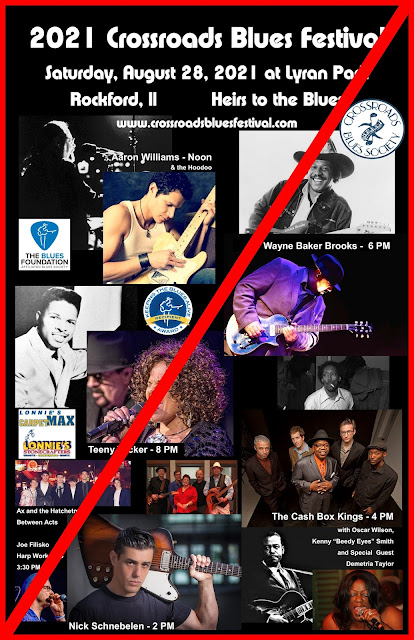 The 2021 Festival is cancelled. As of April we do not know if we can do this. To invest the time and money now and then have to cancel this does not work nor does waiting until June or later to start planning should we get the go ahead that the State will allow this. Instead, we have invited 3 of the festival bands to play for us as part of our 2021 Summer Concert Series at Lyran Park.
Posted by Crossroads Blues Society at 2:24 PM 2 comments: 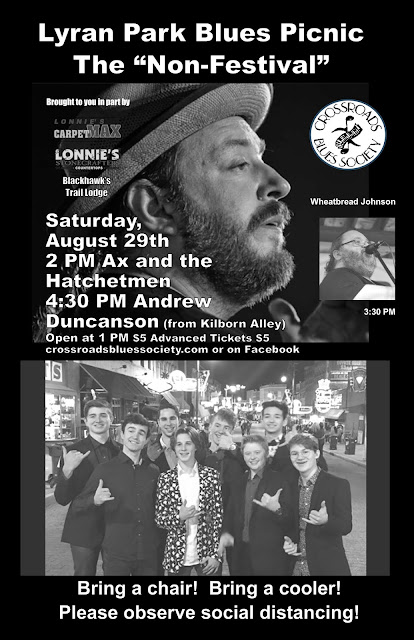 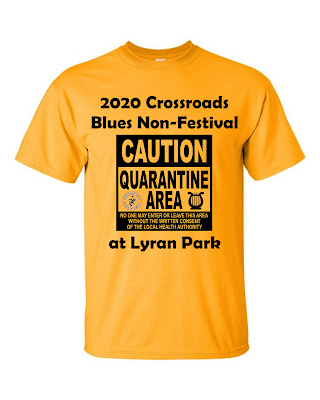 Posted by Crossroads Blues Society at 2:20 PM No comments:

August 29th at Lyran Park cancelled and rescheduled
to August 28, 2021 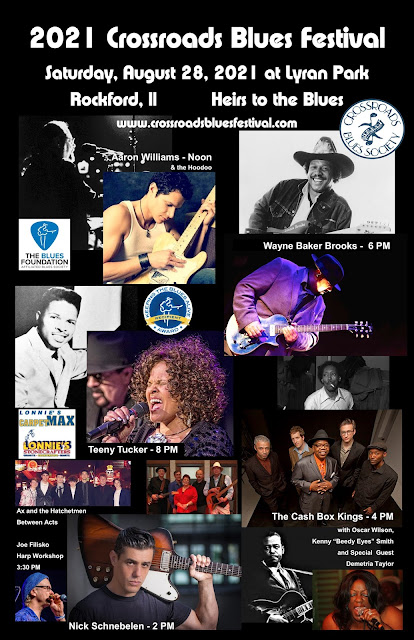